It seems I raised a bit of a stink on Twitter last week:

PSA: if you want to write a new @gnome application, don't use Vala; if you're already using it, consider porting to a non-dead language.

Of course, and with reason, I’ve been called out on this by various people. Luckily, it was on Twitter, so we haven’t seen articles on Slashdot and Phoronix and LWN with headlines like “GNOME developer says Vala is dead and will be removed from all servers for all eternity and you all suck”. At least, I’ve only seen a bunch of comments on Reddit about this, but nobody cares about that particular cesspool of humanity.

Sadly, 140 characters do not leave any room for nuance, so maybe I should probably clarify what I wrote on a venue with no character limit.

First of all, I’d like to apologise to people that felt I was attacking them or their technical choices: it was not my intention, but see above, re: character count. I may have only about 1000 followers on Twitter, but it seems that the network effect is still a bit greater than that, so I should be careful when wording opinions. I’d like to point out that it’s my private Twitter account, and you can only get to what it says if you follow me, or if you follow people who follow me and decide to retweet what I write.

My PSA was intended as a reflection on the state of Vala, and its impact on the GNOME ecosystem in terms of newcomers, from the perspective of a person that used Vala for his own personal projects; recommended Vala to newcomers; and has to deal with the various build issues that arise in GNOME because something broke in Vala or in projects using Vala. If you’re using Vala outside of GNOME, you have two options: either ignore all I’m saying, as it does not really apply to your case; or do a bit of soul searching, and see if what I wrote does indeed apply to you.

First of all, I’d like to qualify my assertion that Vala is a “dead language”. Of course people see activity in the Git repository, see the recent commits and think “the project is still alive”. Recent commits do not tell a complete story.

Let’s look at the project history for the past 10 cycles (roughly 2.5 years). These are the commits for every cycle, broken up in two values: one for the full repository, the other one for the whole repository except the vapi directory, which contains the VAPI files for language bindings: 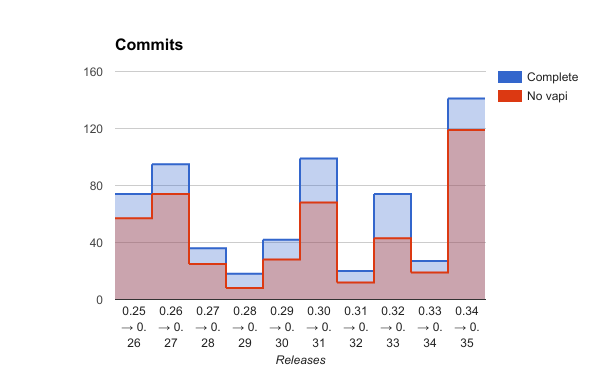 Aside from the latest cycle, Vala has seen very little activity; the project itself, if we exclude binding updates, has seen less than 100 commits for every cycle — some times even far less. The latest cycle is a bit of an outlier, but we can notice a pattern of very little work for two/three cycles, followed by a spike. If we look at the currently in progress cycle, we can already see that the number of commits has decreased back to 55/42, as of this morning. 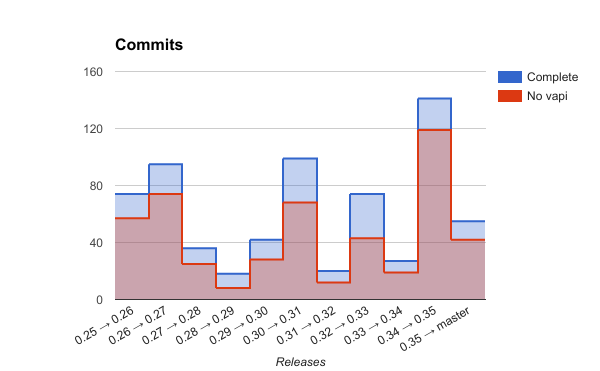 Number of commits is just a metric, though; more important is the number of contributors. After all, small, incremental changes may be a good thing in a language — though, spoiler alert: they are usually an indication of a series of larger issues, and we’ll come to that point later. 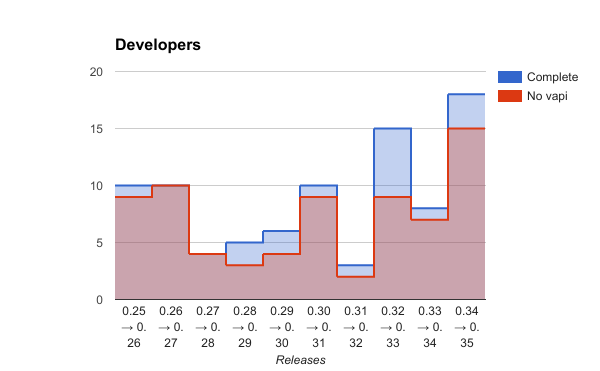 As you can see, the number of authors of changes is mostly stable, but still low. If we have few people that actively commit to the repository it means we have few people that can review a patch. It means patches linger longer and longer, while reviewers go through their queues; it means that contributors get discouraged; and, since nobody is paid to work full time on Vala, it means that any interruption caused by paid jobs will be a bottleneck on the project itself.

These concerns are not unique of a programming language: they exist for every volunteer-driven free and open source project. Programming languages, though, like core libraries, are problematic because any bottleneck causes ripple effects. You can take any stalled project you depend on, and vendor it into your own, but if that happens to the programming language you’re using, then you’re pretty much screwed.

For these reasons, we should also look at how well-distributed is the workload in Vala, i.e. which percentage of the work is done by the authors of those commits; the results are not encouraging. Over that range of cycles, Only two developers routinely crossed the 5% of commits:

And Rico has been the only one to consistently author >50% of the commits. This means there’s only one person dealing with the project on a day to day basis.

As the maintainer of a project who basically had to do all the work, I cannot even begin to tell you how soul-crushing that can become. You get burned out, and you feel responsible for everyone using your code, and then you get burned out some more. I honestly don’t want Rico to burn out, and you shouldn’t, either.

So, let’s go into unfair territory. These are the commits for Rust — the compiler and standard library:

These are the commits for Go — the compiler and base library:

These are the commits for Vala — both compiler and bindings:

These are the number of commits over the past year. Both languages are younger than Vala, have more tools than Vala, and are more used than Vala. Of course, it’s completely unfair to compare them, but those numbers should give you a sense of scale, of what is the current high bar for a successful programming language these days. Vala is a niche language, after all; it’s heavily piggy-backing on the GNOME community because it transpiles to C and needs a standard library and an ecosystem like the one GNOME provides. I never expected Vala to rise to the level of mindshare that Go and Rust currently occupy.

Nevertheless, we need to draw some conclusions about the current state of Vala — starting from this thread, perhaps, as it best encapsulates the issues the project is facing.

Vala, as a project, is limping along. There aren’t enough developers to actively effect change on the project; there aren’t enough developers to work on ancillary tooling — like build system integration, debugging and profiling tools, documentation. Saying that “Vala compiles to C so you can use tools meant for C” is comically missing the point, and it’s effectively like saying that “C compiles to binary code, so you can disassemble a program if you want to debug it”. Being able to inspect the language using tools native to the language is a powerful thing; if you have to do the name mangling in your head in order to set a breakpoint in GDB you are elevating the barrier of contributions way above the head of many newcomers.

Being able to effect change means also being able to introduce change effectively and without fear. This means things like continuous integration and a full test suite heavily geared towards regression testing. The test suite in Vala is made of 210 units, for a total of 5000 lines of code; the code base of Vala (vala AST, codegen, C code emitter, and the compiler) is nearly 75 thousand lines of code. There is no continuous integration, outside of the one that GNOME Continuous performs when building Vala, or the one GNOME developers perform when using jhbuild. Regressions are found after days or weeks, because developers of projects using Vala update their compiler and suddenly their projects cease to build.

I don’t want to minimise the enormous amount of work that every Vala contributor brought to the project; they are heroes, all of them, and they deserve as much credit and praise as we can give. The idea of a project-oriented, community-oriented programming language has been vindicated many times over, in the past 5 years.

If I scared you, or incensed you, then you can still blame me, and my lack of tact. You can still call me an asshole, and you can think that I’m completely uncool. What I do hope, though, is that this blog post pushes you into action. Either to contribute to Vala, or to re-new your commitment to it, so that we can look at my words in 5 years and say “boy, was Emmanuele wrong”; or to look at alternatives, and explore new venues in order to make GNOME (and the larger free software ecosystem) better.